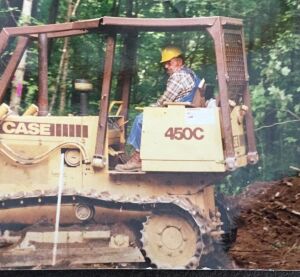 A public visitation will be on Saturday, February 20, 2021 from 9-11:30 a.m. at St John’s Lutheran Church, Spring Valley.  Masks and social distancing required.

Adolph Henry Johnson, age 88 passed away on Monday, February 15, 2021 at his home in Eau Galle Township, surrounded by his family, he says because he was old and tired.

Adolph was born on February 6, 1933 to Henry and Annie (Benson) Johnson in the house where his brother Richard and wife Lynda Johnson reside.  He was baptized and confirmed by Rev. Berven at St. John’s Lutheran Church in Spring Valley.

He attended Brookside School in Spring Lake Township until he was ten years old.  Then he attended Wildwood School until the 8th grade and attended 2 days in high school.

On February 22, 1953 Adolph married Ruth Bowman at Zion Lutheran Church in Woodville  He farmed for many years and worked on the Spring Valley Dam for 2 years.  He drove truck and ran cat for Helgeson Trucking and Nick Brooke Excavating until retirement.  He was on the Spring Valley Fire Department for a short spell.

Adolph and Ruth purchased Ernie’s Log Cabin Bar in El Paso.  They enjoyed their ‘home away from home down south.’  They were members of the El Paso Community Club.  Adolph enjoyed playing cards and always though it was important to be neighborly and has kept in contact with neighbors through the changing times.  He didn’t know any strangers, just friends he hadn’t met yet.

He was preceded in death by his wife Ruth on December 21, 2000; siblings and their spouses: Caroline and Dutch Schoeder, Walt and Marge Johnson, Lyle Johnson, Margaret and Lyman Wolske; brothers-in-law and spouses: Roger and Delores Bowman, Ronald Bowman, Eddy Bergquist; sisters-in-law Carleen Johnson and Arline Johnson; and nephew Rory Johnson.

To send flowers to the family or plant a tree in memory of Adolph H Johnson, please visit our floral store.