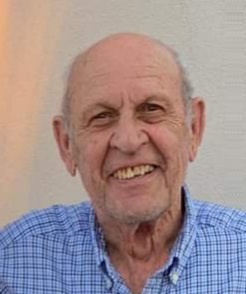 Visitation is Friday, April 22, 2022 from 5-7 p.m. at Keehr Funeral Home, and one hour prior to the service at church on Saturday.

Marvin Ray Anderson, age 84 of Sarona WI, passed away April 13, 2022 in Mesa AZ.  Marvin was born May 12, 1937 in Cumberland, WI to David and Margaret (Shellito) Anderson.  He graduated from Cumberland High School in 1955.  After graduation, Marvin moved to St Paul and worked in the Title Insurance business field for several years.

On August 29, 1958, Marvin married the love of his life, Carol Alborn.  The couple raised their 4 children in Minneapolis until they made a leap of faith and moved to Woodville WI in 1979 to start a liquidation business.  C&M Liquidators quickly became known to all as the ‘fun place to shop’.  Marvin and Carol operated C&M until retiring to Long Lake WI in 2005.

Marvin was a proud Woodville Lions Club Member, and was Lions President 1992.  Alongside Russ Lund and Larry Knegendorf, the three coordinated the Syttende Mai parade for many years.

Marvin enjoyed spending time with family at the cabin on Long Lake.  For 29 years, every fishing opener was an Anderson family contest of who could catch the best fish. If it was a close call, Marvin was the judge of who’s name would be added to the Anderson Family Trophy.  (It always helped to be a grandkid!)

To send flowers to the family or plant a tree in memory of Marvin Anderson, please visit our floral store.