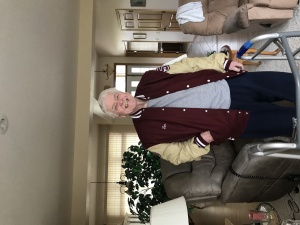 Visitation will be on Saturday, January 8, 2022, from 1-2 p.m. at Zion Lutheran Church, Woodville, in the fellowship hall.

A Celebration of Life will be held at 2 p.m. at Zion Lutheran with a luncheon and time of fellowship following the service until 4 p.m.

If my grandpa Tim wrote this, he wouldn’t have said much. A paragraph or maybe two that gave people enough detail to smile and say “that’s nice” but not so much that they might miss a snap if the Packers were playing. He’d say he loved his family—his wife, Sylvia, and three kids, Julie, Susan, and David. He’d mention working at 3M but wouldn’t dare hint at the 122 patents filed under his name. And he’d spend most of his few words talking about fishing. Then, he’d cap his pen and get back to the John Sandford novel burning a hole in his side table. But I’ll tell you a little more about him. And don’t worry, grandpa—the Packer game is on in the background, and I won’t miss a play.

You’re reading these words in the newspaper under a small, black-and-white photo of the handsome fella, so you already know he’s gone home. So, I won’t dwell too much on that. Other than telling you he passed away peacefully Sunday morning December 19 at Parkview Nursing Home in Woodville, WI, I’m not going to say a lot about the end of his life. It’s over with and he’s busy chatting with his aunts and uncles and listening to Marty Robbins sing live, so I’ll focus on the 83 beautiful years we get to look back on and celebrate.

Timothy Charles Sandvig was born March 7, 1938 in Spring Valley, Wisconsin. He spent his childhood along the Eau Galle river, camping and fishing and building log rafts with his brothers and friends. He played football at Spring Valley High School and hunted squirrels in the woods behind his house. When he was 18, he asked the former Syttende Mai Queen out on a date. He and Sylvia caught a movie for 25 cents a ticket and shared two bowls of oyster stew and a steak that hung off the sides of the platter that held it. They spent a few months fishing and walking in the woods and whistling hymns in Tim’s car, and less than a year after that first date, on September 14, 1957, they were married.

After graduation, Tim joined the Navy, and he and Sylvia moved to his base in Escondido, CA and rented a studio apartment with a pomegranate tree in the backyard for $45 a month. He served overseas in Japan and worked for General Electric in Thule, Greenland while Sylvia stayed in California with their first child, a baby girl named Julie—or as Tim was told by an incorrect telegram sent to his ship: Lulie. After the Navy, Tim and Sylvia considered buying a chicken franchise called Chicken Delight, but opted instead to put the money toward a college education for the both of them. Judging from the fact I had never heard of Chicken Delight until my grandma told me that story, I’d say they made the right call. And although they missed out on free drumsticks, their degrees from the University of Wisconsin-River Falls led to greener and less greasy pastures.

Tim chose chemistry as his major because it had the shortest line at registration. And after four years of raising a child in their trailer home, welcoming a second (Susan), and working nights as a janitor and secretary at 3M where they would see each other in passing, Tim and Sylvia graduated. Tim taught high school science in River Falls until 3M called to offer him a job as a chemist, a position he held for more than 30 years. And outside of work, he and Sylvia went on to plan more than 40 annual fishing trips to Canada with friends he met in the lab.

At 3M, he invented the first ever scratch-proof coating for plastic eyeglass lenses, helped Olympic gold medalist Tim Daggett try out a new casting material he invented, and was awarded 20 US patents and more than 100 foreign patents, some coming with a dinner atop the IDS Center in Minneapolis where a waiter would present him a cigar under a glass case. But other than Sylvia, he never told a soul. My mom, Susan, didn’t know the total patent count until this year. She says it was because he didn’t care about all that. He just wanted to get home.

5:30 on the dot. No later or something was up. That’s when he would walk through the door of the Woodville home he shared with his wife and, after welcoming David to the family, three children. He didn’t think about chemistry at home, choosing instead to focus on wrestling with his kids or growing sweet corn or walking through the pasture to give his cows a gentle rub on the head. Oh, and of course he watched the Packers. He never missed a game. So much so that he once climbed onto the roof during an ice storm to straighten the TV antenna, slipped off, dislocated every toe on one foot, and asked for a spinal anesthetic so he could watch the rest of the game from his hospital bed. Heck, some of the last words he ever said to my mom were “Did the Packers win?” You bet they did.

As a retiree, Tim read westerns and mysteries and To Kill a Mockingbird, helped Sylvia can vegetables from their garden, and did a lot of fishing. Immediately after retirement, they took a two-month trip to Seward, Alaska to stay with Susan and her husband Todd. There, they fished for silver salmon almost every day out of the boat they hauled 3,300 miles up that Alcan Highway. They kept up the Canada trips each year, too, competing with their pals to see who could catch the heaviest total weight in fish. Sylvia usually beat Tim, but he wasn’t in it to win. He just wanted to be on the water.

I bet that’s where he is now. On the water. Casting a line and reeling up eternity with the people who taught him how to set the hook. I bet he’s smiling—enjoying whatever conversations he can listen to and the silence that lies between them. And I bet he’s thinking back on 83 years of creek-rafting, squirrel-hunting, corn-shucking, Packer-watching, tomato-canning, cast-inventing, grandkid-wrestling, deep-deep-listening, life-loving fun.

You deserve that, grandpa. Catch a big one for us.

To plant a tree in memory of Timothy Sandvig, please click here.